All Lucky Dice In Mount Craw 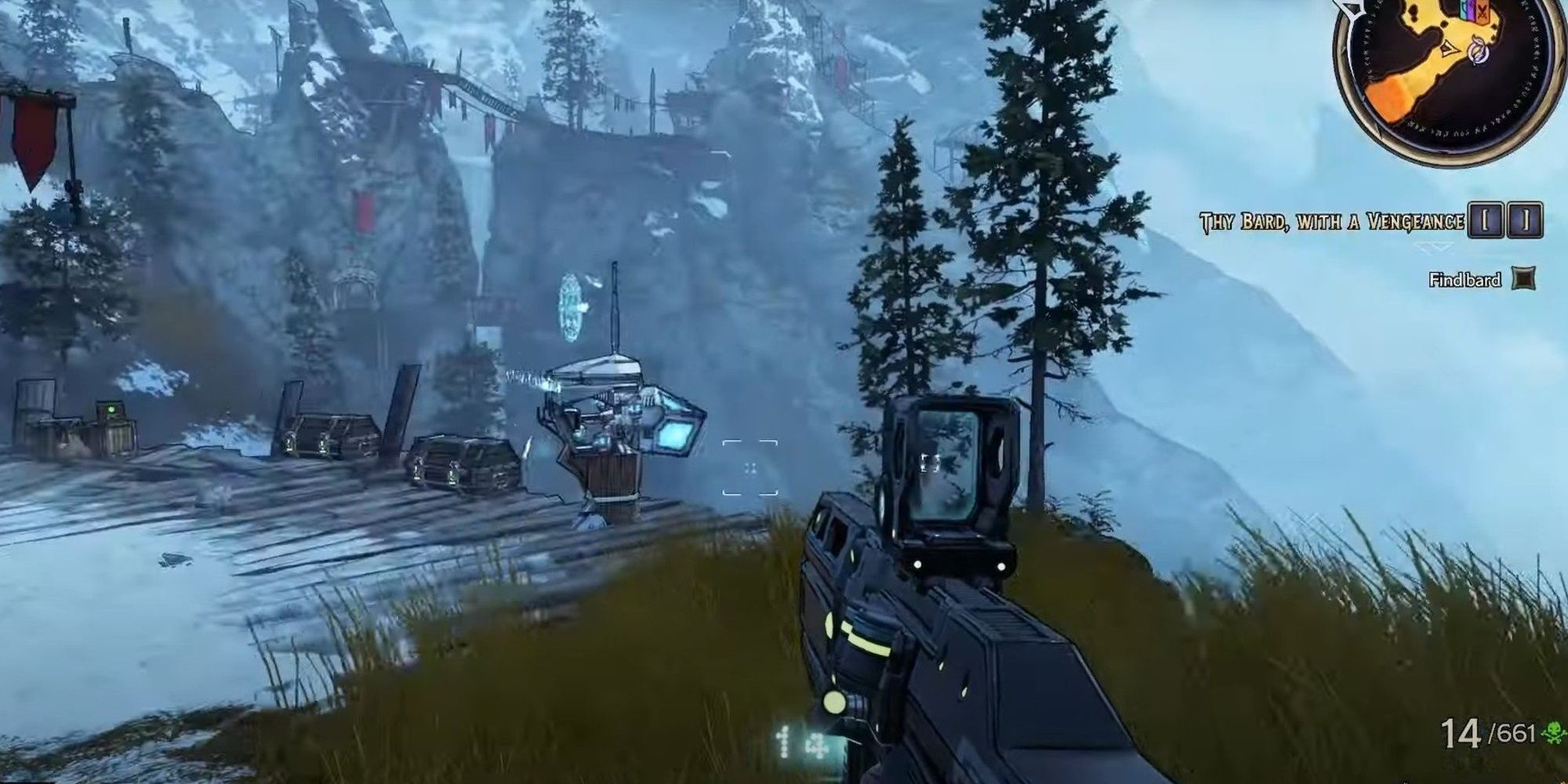 Imagine the feeling of finally finding every last one of the 260 Lucky Dice in Tiny Tina’s Wonderlands. Now imagine how much getting that 20% Loot Luck increase would help your gameplay.

RELATED: Borderlands Movie Reshoots Are Being Taken Over By Deadpool Director Tim Miller

By finding all the Lucky Dice in the Mount Craw area, you will be 19 dice closer to this dream. When you reach the end of this guide, you’ll have a noticeable dent in this achievement. Keep in mind that the order in which the dice are listed may not be the same order as that in the game and the purpose of this is to help make it easier for you to find them.

When you first arrive at Mount Craw, be sure to pick up the mission that appears as a special exclamation point above a goblin’s head. You will need this mission to gain access to the areas you will find the Lucky Dice.

The first dice you will come across will be in a little nook in a rock wall. It is located between the first mission and the red wall.

Once Jar the goblin opens the red door, you will have access to the cave that will have another Lucky Dice which is tucked away a little.

Bracing The Wind On The Porch

The third dice is on the porch of a house next to a couple of crates and a bag in a town in the big open area of the map.

When you get to the fourth dice, you will be searching the basement of a house. Once you find the right house, the dice will be next to a bench that has a lantern on it.

Standing on the deck of this house facing out, you will see some stilted platforms up on the mountain, a tea pot-looking house, and another cabin. When you first walk inside, there are a couple of small safes to your left and stairs straight ahead to go into the basement.

This dice can be found out in the open on a wooden platform next to a weapons case.

The next one can be found in a little open hut that has some small safes against the back wall of it in a small village area.

When you enter this snowy cave right next to a travel station, look directly to your left, and you will see a Lucky Dice hidden in a dark corner.

RELATED: Tribes of Midgard Shift Codes Explained – Where to Find and Redeem Codes, What You Should Know ASAP

The next area, you will see on the map has orange, magenta, and blue flags as well as a travel station. Once you travel here, pick up all 3 of the side missions at the same time and start with forgery. This is a Claptrap mission with two hidden dice locations.

As you may have suspected, where there are goblins, they are probably underground mines in the map. You may have to explore a little bit but if you battle your way through goblins down a mine tunnel, you will see a glowing Lucky Dice hidden in the corner.

On the gate of the originally locked-off area, there is an upper deck of a house that you will see has the next dice. Once Claptrap opens the door, use the rope ladder on the fence to climb up to the roof.

To progress through to some of the next few dice, pick up part two of the main mission from Jar the goblin called The Slayer Of Vorcanar.

Continuing on to dice number 11, follow the map, and you will come across an area that has deep trenches and is all around very smoggy area. There is a small cabin with a fire pit out front as well as a barrel and box.

You will also see a medieval-looking chandelier hanging out front. If you go through the door of this cabin, the dice will be on your right next to some small safes.

This next one is a bit of a run. You must go to the travel station located on the upper left part of Mount Craw, just to the right of the purple mark on the map.

Once there, you will run straight up the rope ladder, over a wooden bridge, and veer to the right until you come to a ledge with torches. Jump up on that ledge then onto the pipe that is blowing air to get to the next platform.

Run to the right on this platform and down a long wooden bridge. Before you get to the end of the bridge, jump off to the right on this wooden ledge that has a couple of torches lighting it up. Keep running to your left, avoiding the air pipes until you come to the Lucky Dice.

Be careful of traps. There are pipes that blow air and can blow your character off the map.

The next dice is behind a dome-like structure next to a cliff drop off into lava. Rotating your view of the map, so the exclamation points are on the left side and the three green symbols are on the bottom right, you will head left from those green symbols.

You will now be traveling just below those three green symbols and to the right to find dice 13. This one should be right near a travel station on a wooden platform overlooking a small village and wooden bridge.

Keep progressing with the Vorcanar mission to gain access to these Lucky Dice.

Past The Draw Bridge

You must go over the draw bridge to travel across the lava and move forward until you get to an open area that has hanging medieval lanterns hanging in the cave. This dice is up on a wooden platform tower overlooking small round dome huts in the fiery caves.

Next To Wooden Stilts

A little further down in this single-player shooter, you will find another dice near some stilts holding up a wooden platform next to a dome hut.

Next To Ice Village House

This next one you will have a bit of a run to get to. Travel right across from where you were for the previous dice, and you should see a half ladder leading to a wooden platform.

Once you climb that ladder, head up the ramp, and run to the right until you see a small wooden platform on a clay wall to your left. Jump onto this platform and run across the bridge and veer to the right.

You will go down the ramp and run until you find another wooden board path to your left that leads you down to a little village on ice. Go right on the porch of the house and when you get to the edge, take another right. The dice will be next to the house against the rock wall.

At Tribute Way Near Fire Pit

Next in Gearbox’s Tiny Tina’s Wonderlands game, you will head to Tribute Way on the map and once you battle your way through Goblin Runts, you will find the dice next to one of the dome huts around the village bonfire pit.

One thing that’s great about the Borderlands series is that there is always an overabundance of side missions allowing you to play the game by choosing your own adventure, in a way.

If you head to the fast travel station where you collected the Claptrap mission, you can collect the Non-Violent Offender mission from Bench the goblin in order to collect the last couple dice. By accepting this quest, an area will open on the map.

Positioning your map so that the travel station, and you are on the right side, you will head left and down to the new area. You will eventually reach a snowy broken bridge. If you jump off to the right, you will see a dice on a stand-alone stone pillar.

For the last dice, instead of jumping off to the right, jump off the other side and land on the short pillar. From the pillar, you will jump across to the rocks and keep heading upwards jumping to rocks until you reach the snowy ledges with candles. Jump from ledge to ledge continuing up until you come to a little path between the rocks.

Head through the tiny cave and follow the ledges. You will then head down. The last Lucky Dice will be on a snowy ledge surrounded by a few candle clusters.

NEXT: New Tales From The Borderlands Is Like A First-Time TTRPG

What’s better: a pre-boss battle supply cache, or resources too good to use?