Alicent’s Green Dress in House of the Dragon Explained 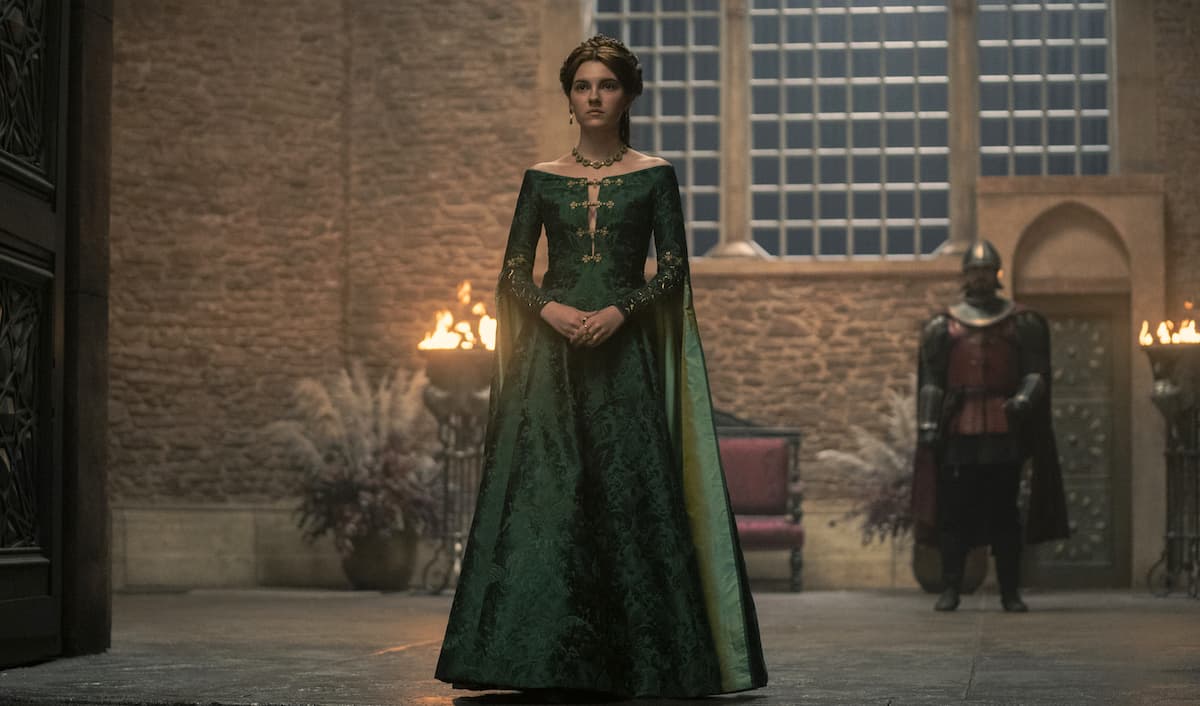 Here’s our take on the meaning behind Alicent’s green dress in House of the Dragon.

Episode 5 of House of the Dragon was an explosive one, giving us a rather bloody wedding, along with some shocking character development and deaths. One of the more notable moments of the episode was Alicent’s entrance into the hall with a lovely green dress, and there’s definitely more to that dress than its pretty fabric. Here are our takeaways from Alicent’s green dress in House of the Dragon.

First, let’s go over the more literal interpretation. As Alicent walks into the hall, Larys makes a comment to Harwin, stating that when Hightower gathers Oldtown for war and lights its beacons, they glow green. The color of Alicent’s dress definitely signifies that she’s ready for a war with the Targaryens, and Rhaenyra in particular if her son’s life is ever in danger.

Alicent likely isn’t going to start a war herself, but her green dress represents her taking a stand for herself and getting prepared for a possible conflict. This is backed up by the short scene she has with Hobert Hightower, who tells her that Oldtown stands with her. Alicent spends most of this episode quietly gathering allies, making it clear that if a war should happen, she’ll be ready for it.

There’s also a more metaphorical meaning behind her green dress in House of the Dragon. Episode 5 essentially marked the end of her friendship with Rhaenyra, not just because she was lied to and had her father sent away as a result, but likely also because she’s grown fed up with Rhaenyra’s attitude and lack of care for the rules.

It’s not explicitly stated in the show, but it’s very likely that Alicent has been envious of Rhaenyra’s rebellious nature all these years, especially since she’s been forced to bear children for Viserys, while her friend can seemingly sleep with whoever she wants and do whatever she wants with no consequences. It’s fitting, then, that Alicent shows up in a green dress in this episode to symbolize her jealousy for her friend… or how she’s so green with envy.

While Alicent has largely tried to play her role as queen as politically as possible, she finally comes to terms with her own feelings towards Rhaenyra and turns against her as a result.

That’s all you need to know about the meaning behind Alicent’s green dress in House of the Dragon. Be sure to search for Twinfinite for more news and information on the show, including why Criston killed Joffrey, and why Alicent stopped Criston from killing himself.

How To Play Gun Run in Apex Legends