A playlist for Danny Boyle’s THE MATRIX-themed dance show 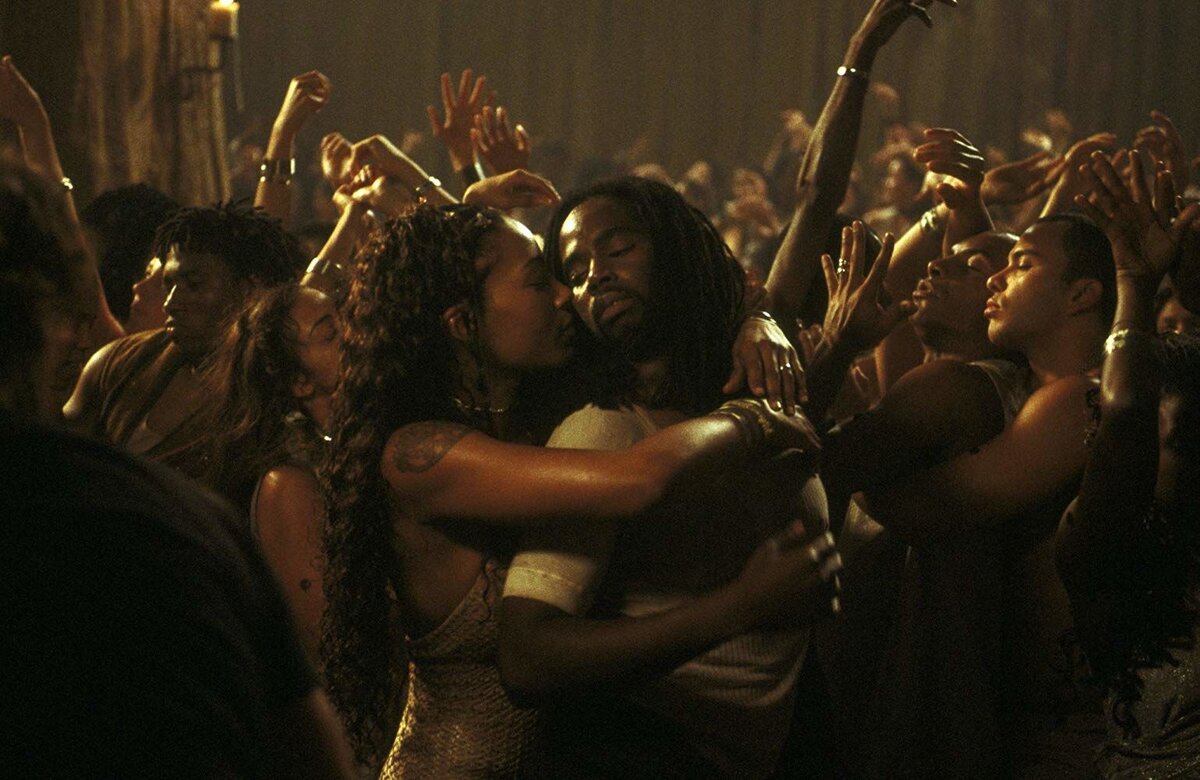 The Beat’s Gregory Paul Silber has been accused of having a bit of an… obsessive personality. In Silber Linings, he takes a humorous look at the weirdest, funniest, and most obscure bits of comics and pop culture that he can’t get out of his head.

Well here’s an eyebrow-raising headline for mega-fans of The Matrix franchise like myself: Danny Boyle, the British filmmaker whose diverse resume includes the influential indie Trainspotting, the horror touchstone 28 Days Later, and the Academy Award-winning drama Slumdog Millionaire, will direct a dance performance adaptation of Lily and Lana Wachowski‘s original 1999 action/sci-fi blockbuster, The Matrix.

We are so gassed to announce our BB bosses @KenrickH2o & @mikeyjdotnet are collaborating with director Danny Boyle, designer Es Devlin and writer @SabrinaMahfouz to co-create

Per Variety, the show will be titled “Free Your Mind,” and the “large-scale immersive performance” is set to debut in London in October 2023. The logline reads: “Combining the hip-hop choreography of hundreds of dancers with the latest immersive design, ‘Free Your Mind’ will take audiences on a thrilling journey through The Matrix and into a new realm of possibilities.”

This is weird for several reasons. First of all, I don’t know about you, but the guy who directed that movie where everyone on Earth forgets about The Beatles except one guy isn’t exactly the first name that comes to mind when I think “hip-hop choreography.” Even beyond that, the idea of The Matrix — a futuristic-yet-thoroughly-1999 retelling of Plato’s Allegory of the Cave featuring evil robots and highly-stylized kung-fu action — retold through the power of interpretive dance is objectively hilarious.

But hey, choreography is hardly my expertise. Music is a rich part of The Matrix franchise’s history, and if done right, a dance performance which earnestly seeks to honor that legacy could actually be something special.

So Danny Boyle, if you’re reading this – which I’m sure you are – here are a few suggestions for a danceable, hip-hop-adjacent playlist for your dancers to make The Wachowskis proud.

A few notes on my selections before we get started. While “Free Your Mind” promises hip-hop choreography, and a number of rap songs made the cut for this playlist, I didn’t limit it to strictly hip-hop. Not only does that make it easier to find a wider variety of songs that are on-theme with The Matrix, but part of the magic of hip-hop has always been that it borrows from and recontextualizes music from different genres, including funk, disco, and rock – all of which are represented here. Besides, while I don’t know much about choreography and am an actively terrible dancer, I know that hip-hop dance styles can be applied to non-hip-hop music.

And perhaps most importantly, I tried to ensure all these songs fit the distinctive vibe established by the scores and soundtracks of previous Matrix films. The Wachowskis seem to have a wide musical palette, but a dance performance based on The Matrix still needs to have their unique je nais se quois: futuristic, tense, and eminently cool.

This collaboration between industrial rock band Filter and electronic act The Crystal Method originates from the 1997 Spawn film. It’s a terrible movie, but the soundtrack is shockingly listenable (and danceable) thanks to its then-novel gimmick of pairing hard rock artists like Metallica and Korn with electronic dance artists like The Prodigy and Moby. Many of those songs fit right into The Matrix‘s aesthetic, with this particular one being used in the trailer (but not the film itself).

If “Free Your Mind,” the dance adaptation of The Matrix, doesn’t include “Free Your Mind,” the funky anti-prejudice anthem colored by hard rock guitars, what is Danny Boyle even doing? While the song’s lyrics are more concerned with calling out “shallow” racists and sexists than The Matrix‘s themes of existentialism and late-capitalist angst, “free your mind / and the rest will follow” is as good a summation of the film’s message as any.

“The rest,” as it were, includes your ass. “Open up your funky mind and you can fly,” sings funk bandleader George Clinton in the title track from his funk rock project’s second album. Despite a key scene in a dance club, we don’t see much onscreen ass-shaking from Neo (Keanu Reeves), but what’s most important is that his mind is funky, and by the end of the film, we finally do see him fly.

“Ugh, I like it like that / She working that back, I don’t know how to act / Slow motion for me, slow motion for me” – Neo watching Trinity (Carrie-Anne Moss) fight a bunch of Agents, probably.

Okay, fine, I’ll admit that I just wanted a song that would recall The Matrix’s signature “bullet time” fight sequences, and this was the only one I could think of that prominently features “slow motion” in the lyrics.

Speaking of songs that don’t really have anything to do with The Matrix lyrically, no, there aren’t any scenes in which Morpheus (Laurence Fishburne) DIGs through the ditches or BURNS through the witches and SLAMS in the back of my DRAG-U-LAAAA! But the nu-metal classic plays during the club scene when Neo meets Trinity in person for the first time, so if it’s good enough for Lily and Lana Wachowski, it’s good enough for me. Besides, have you heard “Dragula” lately? It fucking rocks. And yes, you can dance to it.

Unbeknownst to most audiences at the time of release, the so-called “Wachowski Brothers” were in fact sisters, although it would be many years before they would publicly announce their respective transitions. And since trans fans and critics have since embraced The Matrix‘s trans subtext, I wanted to be sure I included at least one transgender musician here. Lyrically, this banger by experimental pop singer/producer Sophie (who tragically died last year at just 34 years old) speaks beautifully to one of the franchise’s key themes: the power of choosing who you want to be. “I could be anything I want…” Sophie sings. “Anyhow, any place, anywhere, anyone… Any form, any shape, anyway, anything, anything I want.”

This hard-rocking yet danceable hit by industrial rock icons Nine Inch Nails perfectly captures The Matrix‘s exploration of the dilemma between choosing to fight for freedom rather than living a life of blissful ignorance serving one’s masters. “Just how deep do you believe?” Trent Reznor asks. “Will you bite the hand that feeds? Will you chew until it bleeds? Can you get up off your knees? Are you brave enough to see? Do you wanna change it?”

“Something’s in the air” is literally the only lyric to this track off the French house luminaries’ seminal second album, Discovery, but it has that all-important Matrix vibe, and the title is a nod to the superhero comic influences that the Wachowskis affectionately borrow from.

In The Matrix universe, Zion is the last remaining city in “the real world,” unconquered by the malevolent forces that run The Matrix. In this neo-soul song by rapper/singer Lauryn Hill, featuring the equally soulful latin guitar of Carlos Santana, Hill incorporates Zion’s biblical origins metaphorically as she reflects upon her pregnancy. Disparate concepts, sure, but they both use Zion to represent the desire to fight for a better world, whether that’s for the sake of your child or all of humanity.

What would a Matrix dance show be without a reference to Neo dodging bullets? And this synth-pop song by influential Swedish dance musician Robyn perfectly captures the power Neo and Trinity derive from their romance with each other. “Your love is ultra magnetic and it’s taking over / This is hardcore / And I’m indestructible.”

This haunting 2-part epic that closes out the third album by the acclaimed hip-hop duo of Killer Mike and El-P (with a guest verse by Rage Against the Machine rapper Zack de la Rocha) speaks to their fears about the rise of fascism and the need for rebellion. Sadly, in the decades since The Matrix’s release, it’s become all too clear that the threat of a fascist takeover a concept is hardly just science fiction. “Maybe that’s why me and Mike get along,” El-P raps. “Hey, not from the same part of town, but we both hear the same sound coming / And it sounds like war / And it breaks our hearts.”

And finally, we’re ending the performance with the same song Lily and Lana ended The Matrix with, a furious cry for awareness and revolution from the fiercely political rap-metal pioneers. “Networks at work, keeping people calm / You know they went after King / When he spoke out on Vietnam / He turned the power to the have-nots / And then came the shot.” For all their dazzling sci-fi action spectacle, the Wachowskis made sure to remind us how much was at stake in the real “real world.”

What songs did Greg forget? Disagree with any of his choices? Yell at him in the comments!