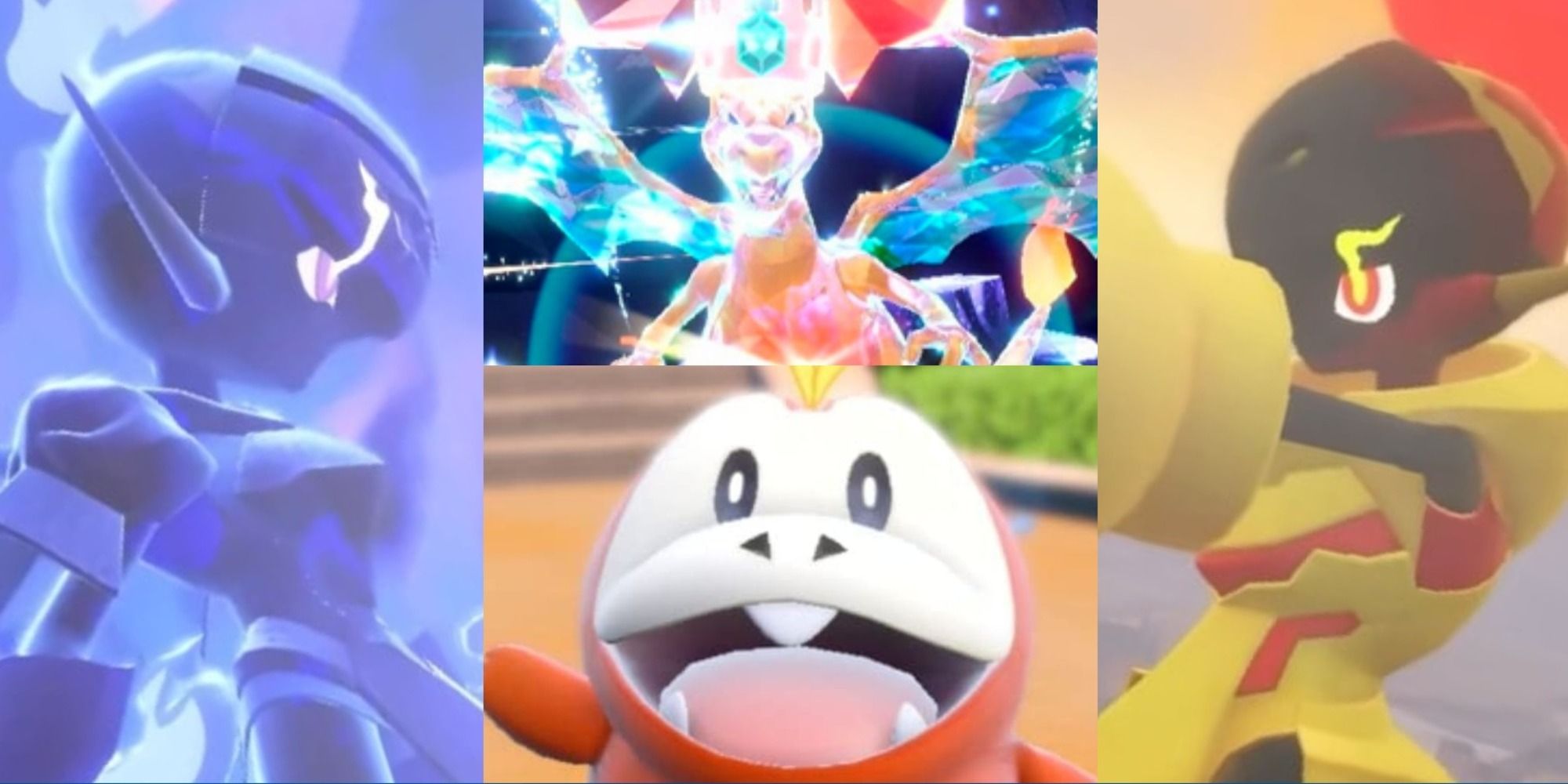 Fire-Types are one of the most resourceful Types in the Pokémon series. They have an advantage over Grass, Ice, Bug, Steel, and Fairy-Types, but are weak to Water, Rock, Ground, and Dragon. Many Fire-Type moves can inflict the Burn status, which will slowly hurt the Pokémon affected by it every turn.

RELATED:Pokemon Scarlet & Violet: How To Save & Additional Options

Pokémon Scarlet and Violet’s Paldea region is home to over 400 Pokémon, and nearly 30 of those are Fire-Type. This list will help you track down some of the best Fire-Types in the game.

Due to no longer having the ability to Gigantamax, Coalossal is a little worse than it was in Sword and Shield, but it is still a very good option thanks to its high HP, Physical Defense, and Special Defense stats. Additionally, its Fire/Rock-Type combination allows it to resist 7 Types while only being weak to 4.

Its earliest Prevolution, Rolycoly, doesn’t start as a Fire-Type but gains it once it Evolves into Carkol at level 18. Carkol can then become Coalossal at level 34. Rolycoly can be found inside caves in the East Province’s third area.

If you’re looking for a simple Physical Attacker, then Flareon is an excellent option. It is a pure Fire-Type, and its Base Attack Stat is 130. If you get one that has the Flash Fire ability, then Flareon will pack an even harder punch after getting hit by a Fire move.

Eevee can become a Flareon at any level by giving it a Fire Stone. The earliest location Eevee can be caught at is the South Province’s second area. You can eventually buy Fire Stones from the Delibird Presents shop.

Like Flareon, Arcanine is a pure Fire-Type, and it evolves from its previous form when exposed to a Fire Stone and can have the Flash Fire ability. Arcanine is just slightly better, thanks to having more balanced stats. It can work well as either a Physical Attacker or Special Attacked.

RELATED:Pokémon Scarlet And Violet: How To Use Let’s Go!

Growlithe can be found as early as the South Province’s third area. It’ll usually spawn in the half of the area closer to Artazon town. Unlike a few other Pokémon on this list, this flame-breathing dog is actually a Fire-Type from the very start, rather than only getting the type once Evolving.

Fletchling will likely be one of the first Pokémon you encounter, as it can be found on Poco Path near the player’s house. It doesn’t start as a Fire-Type, but at level 17, it’ll become the Fire/Flying Fletchinder.

Once it reaches level 35, it’ll then become the incredibly fast Talonflame, which has access to massive damage recoil moves like Brave Bird and Flare Blitz. If you didn’t pick Fuecoco as your starter, then this line of birds is the best super early game Fire-Type optional.

Armoredge is a brand-new Fire/Psychic-Type. It Evolves from Charcadet by using an item exclusive to the Pokémon Scarlet version. You will need to trade some items with an NPC from the town on the East side of the map called Zapapico.

The Auspicious Armor will allow Charcadet to become Armoredge. Charcadet is a slightly uncommon spawn but can be found in a majority of the lower half of Paldea.

Like its counterpart Armoredge, Ceruledge evolves from Charcadet by using a unique item on it, but this time the item is exclusive to Pokémon Violet. The same NPC will offer to trade the Malicious Armor in this version.

While both evolutions of Charcadet are good, this one takes the edge due to its secondary Typing. Ceruledge is part Ghost-Type, meaning it can not be hit by Normal or Fighting-Type attacks.

Charizard is harder to obtain than most Pokémon on this list, as it is only available in event Tera Raid Battles. To make up for lacking many forms in previous Generations, this Charizard has access to the Dragon Tera-Type.

Charizard is a very fast Special Attacker, and thanks to its secondary Flying-Type, it is completely immune to Ground-Type attacks. Starter Pokémon always have a very high Base Stat total, so Charizard can be a ruthlessly powerful addition to your team.

If you’re confident in wanting a very powerful Fire-Type on your team, then choosing Fuecoco as your starter is a very good decision. Bug and Grass are potentially the first two Gym Types you’ll come across, giving players who chose this chili pepper crocodile a big advantage.

It’ll become Crocalor at level 16 and then the Fire/Ghost-Type Skeledirge at level 36. This is the same Type combination as Ceruledge, meaning it has the same advantages.

Chi-Yu is a newly introduced Fire/Dark-Type Legendary, which can only be fought after finding eight glowing stakes scattered throughout Paldea. Its Type combination is excellent, as it has 6 resistances and is completely immune to Psychic attacks.

Although it may not look it, Chi-Yu is a power-house. Its Beads of Ruin ability lowers the Special Defense of every other Pokémon on the battlefield, and it has a very high Special Attack. This combination makes it very easy to take out Pokémon that don’t have extremely high Special Defense.

Volcarona has been consistently a high-tier Pokémon in competitive play for many Generations in a row. It is a Fire/Bug-Type with high Physical Defense, high Special Defense, high Speed, resistance fo 6 Types, only 3 weaknesses, and access to a wide variety of attacks.

Scarlet and Violet have added two new forms for this Pokémon; Slither Wing and Iron Moth. The former is only in Scarlet, while the latter is in Violet. They can be found very late into the game at Area Zero.

The Devil in Me: Bearings guide

One of the Best Anime Murder Mystery Thrillers…